British culture and island informality collide in Victoria. This sophisticated seaside city is full of historic sites, parks and gardens. Take a walking tour - many of which begin at Parliament Buildings at Victoria's Inner Harbor. Combined with majestic Empress Hotel, these monumental buildings give the city a regal European feel. See equally impressive modern structures, such as Royal British Columbia History Museum, or replicas of large, native Northwest Indian houses at Thunderbird Park. Unique attractions include Undersea Gardens, Miniature World, Maritime Museum, Chinatown and Royal London Wax Museum. A memorable places to visit is world-famous Butchart Gardens, with 5,000 fauna varieties. The dazzling gardens on Saanich Inlet are beautiful at night, when hundreds of lights sparkle along winding paths. Additional gardens in Victoria include Crystal Garden and the gardens surrounding Government House and near Craigdarroch Castle, a towering Victorian mansion complete with a tower and turrets. Tour this city in a horse-drawn carriage.

Astoria is a city of 10,000 people on the Columbia River, just a few miles from the Pacific Ocean. It is surrounded by the beauty of the forest, mountains, 3 rivers and the sea. Astoria is part of a nationally significant historic region at the western end of the Lewis & Clark Trail. Astoria is the oldest American settlement west of the Rockies; a place that takes visitors back to simpler times, its architecture dominated by hundreds of Victorian homes clinging to steep wooded hillsides and with a revitalized 1920s era downtown; all set against a backdrop of tremendous natural beauty. Unspoiled and generally uncrowded, Astoria is near several first-class interpretive attractions including Fort Clatsop, the Columbia River Maritime Museum, the Flavel House, Fort Stevens State Park, the Astoria Riverfront Trolley and the Astoria Column. Because of its steep hills and beautiful Victorian homes, Astoria has been called the "Little San Francisco of the Pacific Northwest." 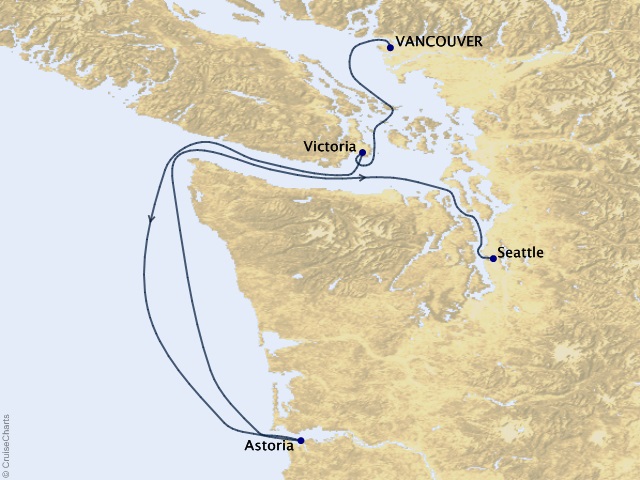 Rates are cruise only, per person, based on double occupancy. Taxes, Fees and Port Expenses of $183 additional for all guests. Fuel surcharges may apply. Please ask your travel counselor for details. Rates are subject to availability and may change without notice. Restrictions may apply.

All prices per person and in USD unless otherwise stated.
Offer ID:
1316847