Ketchikan is known as "Alaska's First City" because it's the first major community travelers come to as they travel north. The city is built on steep hillsides and is billed as salmon capital of the world. A quaint village, the town is three miles long and three blocks wide. With fishing boats sailing in and float planes ascending from the water, this seaside town is bustling with activity. With the world's largest collection of totem poles, Totem Bight State Historical Park offers insight into various native cultures of the Pacific Northwest. These wood-carved creations tell colorful, intricate tales – often showing a family history or depicting a local legend. Ketchikan has many options for adventure of relaxation, including mountain bike tours, sea kayaking, seaplane riding, or strolling down the boardwalk of Creek Street, Ketchikan's most famous section with a historic cable car and quaint boutiques. Blessed with an abundance of hiking trails, Ketchikan offers many breathtaking vistas, including the panoramic, 360-degree view from the top of Deer Mountain.

Juneau is one of America's most beautiful state capitals, with the looming summits of Mt. Juneau and Mt. Roberts providing a gorgeous backdrop. Once part of Alaska's Gold Rush, the city boasts natural and manmade attractions. Downtown is filled with many vibrant buildings, including must-see St. Nicholas Russian Orthodox Church, which houses artwork and artifacts dating back to the 18th century. From the bright mural in Marine Park to the carvings in House of Wickersham, downtown is filled with Alaska's own unique brand of culture and architecture. Often hailed as Juneau's most impressive sight, nearby Mendenhall Glacier is approximately 12 miles long and 1.5 miles wide. See the glacier on a float trip or a "flightseeing" adventure, or hike up one of its trails for a closer inspection. For a bird's-eye view, the Mt. Roberts Tramway offers a short, six-minute trek to the top of Mt. Roberts, 1800 feet above the city. If wildlife is your passion, scenic Admiralty Island has the world's highest concentration of brown bears.

This "Gateway to the Klondike" watched as fortune-seekers headed to Chilkoot and White Pass Trails during Alaska's Gold Rush. Today, feel like a prospector in Skagway, as you walk along its rustic boardwalks and frontier-style storefronts. This cozy town offers a pleasant respite from the hustle and bustle of most cities. With classic cars and one of the oldest narrow-gauge railroads in the world, the city retains the flavor of days gone by and remains an important link to Alaska's history. A stroll down Broadway is a must. Highlights include Arctic Brotherhood Hall. Other buildings like the Trail of '98 Museum, Corrington's Museum of Alaskan History and the Alaskan Wildlife Adventure and Museum present different facets of prospecting times. Before hitting famous Chilkoot Trail, there are other well-marked trails to try. Hiking to Lower Dewey Lake is an easy, 20-minutes, and there are more adventurous trails to remote Sturgill's Landing, Upper Dewey Lake and Devil's Punchbowl. The White Pass Scenic Railway and Eagle Preserve Wildlife Quest provide additional options.

Spread across an impressive 3.2 million acres in southeast Alaska, Glacier Bay National Park and Preserve offers an inspirational glimpse of what Mother Nature does best. The head of Glacier Bay is Tarr Inlet, where scientists have found exposed rock believed to be more than 200 million years old. The Tarr Inlet is home to Grand Pacific Glacier, an active body of ice slowly making way toward Margerie Glacier, which it last touched in 1912. Johns Hopkins Inlet is home to no less than nine glaciers. Framed by rocky slopes stretching skyward more than 6,000 feet, these wondrous bodies are eclipsed only by mighty Mount Fairweather, which at more than 15,300 feet is the highest point in southeast Alaska. In northeast Glacier Bay, the snow-covered Takhinsha Mountains feed active Muir Glacier. The brilliant blue glow of a calving glacier and the thunderous roar of ice crashing into the water below are sights and sounds to remember for the rest of your life. With such diverse landscape, the park provides a variety of habitats for animals.

Glide into College Fjord where you will be completely surrounded by 16 ice-blue glaciers. Each was named for one of the Ivy League colleges by members of the expedition that discovered them.

Whittier, a once-isolated town, is gateway to Prince William Sound. The city is a historical landmark, established by the U.S. Army during World War II. Less than 300 people reside in the town supporting the Alaska State Ferry, the Alaska Railroad, the Alaska Hydra Train, the military tank farm for aviation fuel, the Small Boat Harbor and tourism. See wildlife, waterfalls (watch Horse Tail Falls flow up!), and more! Hike Portage Pass Trail or head to Salmon Runs, beachcomb, bird watch and pick berries. Watersports include boating, sailing, kayaking, and scuba diving. Winter sports include snowshoeing, cross country skiing, and snowmobiling. Begich Towers contains 198 apartments and are 14 stories high. The Buckner Building known as "the city under the roof" was central to this isolated Army outpost. Private developers built the Whittier Manor for civilian employees or military personnel ineligible for other housing. This building has been turned into condominiums. Whittier Visitor’s Center is housed in a 1957 rail car, originally built for Union Pacific as a cafeteria. 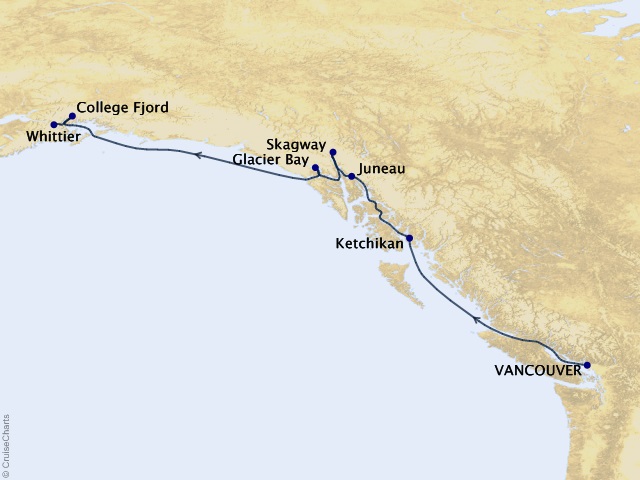 Rates are cruise only, per person, based on double occupancy. Taxes, Fees and Port Expenses of $233.64, transfers, and airfare (unless otherwise stated) additional for all guests. Rates are subject to availability and may change without notice. Restrictions may apply.

See applicable Princess® brochure for terms, conditions and definitions that will apply to your booking.

All prices per person and in USD unless otherwise stated.