Exuma's cays form one of the prettiest and most hospitable Bahamian chains. Bright white sand of deserted beaches contrast the deep aquamarine and jade hues of the water. Lord Rolle imported the first cottonseeds in late 18th century and had more than 300 slaves working on Great Exuma - who adopted their master's surname. When cotton was a financial failure for him and emancipation loomed, Lord John Rolle deeded 2,300 acres of land given to him by the British Government to his foremen slaves. This land has been passed on to each new generation and can never be sold to outsiders. Today almost half the residents go by the name Rolle; one of the largest settlements is named Rolleville. George Town is home to Government Administration Building, a pink and white building modeled after Government House in Nassau. St. Andrew's Anglican Church is a beautiful 150-year old white building with blue doors and shutters and an active place of worship today. Exuma Cays Land and Sea Park is a natural preserve for brilliant coral reefs and exotic marine life.

San Salvador or Watling Island is one of the Bahama Islands, in the Atlantic Ocean. San Salvador is a sleepy, secluded island, believed to be the site of Columbus' first landing in the Bahamas. This is the place to sun and swim and snorkel or in the coral reefs. Watling Island was renamed San Salvador in 1926, commemorating the name given by Christopher Columbus in 1492 to his first landfall in the New World. Some scientists doubted Watling was an accurate match to his description, however, and in the mid-1980s they proposed the smaller island Samana Cay as his original landing point. The local peoples referred to Columbus's San Salvador as Guanahaní.

You'll recall sunning and strolling on a seemingly endless white sand beach. Or relaxing in the shade of coconut palms. You'll remember the crystal-clear water and the multicolored tropical fish. And you'll certainly recollect the graceful gestures of the uniformed "bobbies" directing traffic in the bustling downtown. Nassau will delight you in many ways. With its colorful Colonial architecture. With the warmth of its people. And with the infectious music of steel drums. It's very likely you'll leave this happy place with lots of duty-free gifts and mementos and at least one straw hat. 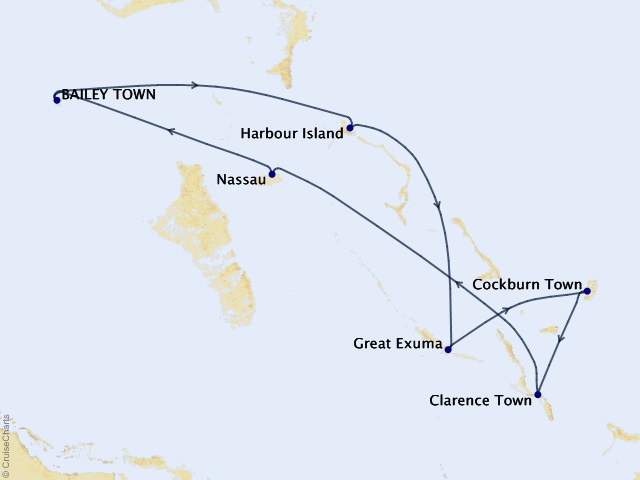 Cruise port, security and handling fees of $900, transfers, airfare, government fees and taxes are additional for all guests.

Cruise-Only fares are per person in U.S. dollars, double occupancy and do not include cruise port, security and handling charges. Solo Traveler Fares are available upon request. All offers may not be combinable with other promotions, apply to first two

All prices per person and in USD unless otherwise stated.